Recently I’ve gotten interested in historical machine translation (bet you didn’t know that exists!) I found a fascinating study of some of the first users of machine translation. They were using the Russian-English system developed at Georgetown University in the 1960s. Most were scientists who lived and worked either in the U.S. or in Europe. The study was very comprehensive, conducted mostly through interviews with the people.

The book also mentions that a user study was done in the same time frame in Russia with users of one of the first systems there, which translated between French and Russian. There is a one-sentence mention that the study had similar results to the American one and that the researcher, Olga Kulagina, was at the time intending to write a book on the system and the user study.

That sends me on a wild goose chase for that user study. I pinpoint 1 book and 1 article by Kulagina in 1979-1982. I start with the book, ordering it through the library’s long-distance loan. Yesterday I get a note that it arrived. I excitedly go to get it and it’s not until I get back to my office that I remember a small but annoying fact.

I don’t know any Russian.

I send a note off to a student asking if they want to help me but I can’t stand to wait for her answer, I have to know right away if the user study is covered. Google Translate app to the rescue! I whip out my phone and start hovering… 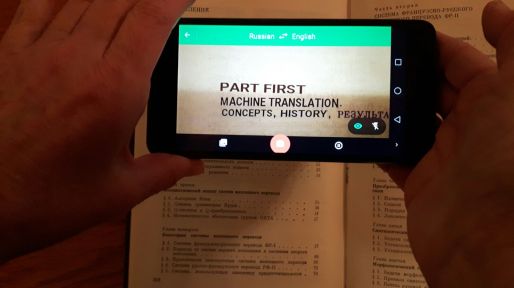 This app, as many of you know, is not at its finest in skimming books. I patiently move it through the table of contents, though, and get a fairly decent idea of what kinds of information is in it.

End result: dead end on the user study, looks like it’s not in this book. I’ll have to try the 1982 article. But it’s nice to get an answer so quickly.

And somehow I think that Olga might like the idea of someone reading her work on machine translation through a translation app in their phone.

Of course you can machine translate this site!